Hi everyone, apologies for my late post. I was supposed to write this two weeks ago but unfortunately I have not been well enough and have found it really difficult to concentrate (Chiari Malformation messes with my concentration a lot).
Finally, here is my update on my experience with a neurosurgeon...

Two weeks ago I had my first appointment with neurosurgeon Mr Thorne, who will be attempting to eliminate some of my debilitating CM1 symptoms. I am being treated at The National Hospital for Neurology and Neurosurgery (NHNN) in Queens Square, London. Luckily for me the hospital is just a short train journey away and it happens to be the best neurological hospital in the country so I already felt extremely lucky and at ease about being treated there.
However, I did find myself feeling really anxious about meeting my surgeon. I wasn't really scared of what he was going to do but more so what he might not do. I have read and heard lots of stories about neurosurgeons who have limited experience with CM1 due to it being so rare and so patients often feel let down and have to get a second opinion. Many people also get told, like I did (explained in the previous post) that their symptoms are not related and that the CM1 was found whilst scanning for something else. It is true, many people do live with the brain herniation and never present any related symptoms so therefore surgery is only performed if the symptoms have become debilitating. I guess surgeons need to be very careful about making the decision to operate, after all it is a serious operation which is not only very dangerous but can also be unsuccessful in the long run.

I was greeted by Mr Thorne's registrar, who was very welcoming and jumped straight in to asking me to number my symptoms in terms of which of them effected me the most. This was difficult to do as all of my symptoms effect me so much in different ways. I started with my memory and concentration, explaining that these had deteriorated dramatically over the past few months. I then went onto my balance, headaches and chocking. He then turned the lights off and did a quick basic eye test and also tested my reflexes and balance. After doing so he explained that there was some damage to my left eye - on top of everything else! And that I am clearly being effected by the condition.

More news I was not expecting - ICP Monitoring

He went on to explain that after looking at my MRI and completing various tests he and Mr Thorne were unsure if the typical CM1 decompression operation was the best thing for me. This was quite startling news as I hadn't herd of any other treatments for the condition before then. Mr Thorne then came in to meet me and explain what was going to happen. Firstly I'd like to say, what an amazing human! Mr Thorne was so friendly and reassuring, he explained everything in immense detail. He told me all about a procedure that has been introduced to CM1 patents which is set up to understand the exact cause of each symptom. This procedure is to determine whether I would benefit from a shunt, which would reduce my CSF pressure or if it would be better go straight in for the big decompression - I will explain what all of this means below. The procedure is called ICP monitoring. It involves having a wire and bolt placed into the skull which is connected to a computer which monitors the pressure of your brain fluid to determined if you have too much fluid pressure (which is caused by the brain herniation/CM1). He went on to say that it is urgent that they perform this procedure as soon as possible so they booked me in for the following Friday and explained that I would be in hospital for up to five days. Because the operation was so soon, I was sent off straight away to have my pre op, which just consists of taking blood and answering questions about my health history.

And so that was pretty much it! I will be writing a detailed post of my experience with an ICP bolt, for anyone who may be getting one or just curious as to what it's all about. I'll leave you with a picture of my MRI compared to a 'normal' MRI so you may be able to get a clearer idea of what all of this means.

Cerebrospinal fluid (CSF) is a clear fluid found around the brain and spine. CSF pressure is when this fluid is blocked or there is too much of it causing dangerous and irreversible damage to the brain.

A shunt is commonly used to treat an excess buildup of cerebrospinal fluid. Shunt systems drain excess fluid from the brain to another part of the body where the fluid is absorbed as part of the circulatory process.

Chiari Malformation is a form of abnormality in the lower part of the brain know as the cerebellum. Here is my MRI - I have circled the herniated cerebellum. 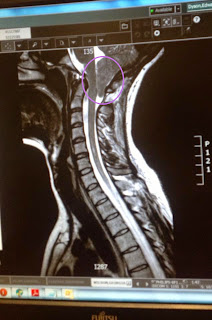 If you have any questions please feel free to leave a comment. Have a great day everyone and stay positive! x

Posted by Georgia and Hattie at 01:51

Georgia and Hattie
Hello! Welcome to Chiari Sisters. We are two sisters who both live with a serious rare neurological condition called Arnold Chiari Malformation. We have decided to create a blog to help support and inspire others living with an invisible illness or disability. We hope that by sharing our journey we will encourage you to share yours and in doing so we will gradually build a world of understanding and support for everyone our there silently suffering.